JBAY.ZONE 425 is the new Sit on Top two-seater Kayak made entirely of laminated PVC with high pressure DROP-STITCH technology for unparalleled rigidity and weight support. The new inflatable canoe has been designed by JBAY.ZONE to have fun on the beach, try fishing or go on an adventure exploring the coastline, rivers or lakes or simply spend a weekend of sport, water fun and positive emotions.

The single center fin and V-shaped keel allow the Kayak 425 to achieve good travel speed and be easily maneuverable on the water.

Thanks to the semi-rigid seats and the construction with laminated PVC and Drop-Stitch teconlogy with flat bottom, the Kayak 425 proves to be comfortable and stable, ideal for Cruising sessions.

The new 425 Kayak in JBAY.ZONE Drop-Stitch fabric is suitable for two users with a total weight of 205kg. 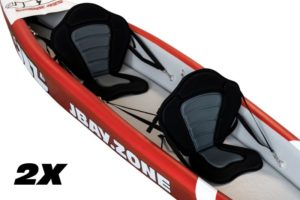 The JBAY.ZONE semi-rigid polyester seat, comfortable and convenient, attaches to the steel D-rings on the inside of the inflatable tubes. 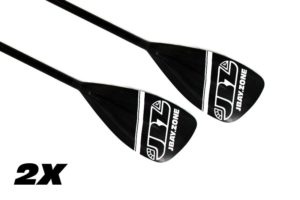 Double paddle with handle decomposable into three parts in aluminum with an overall length of 230cm. 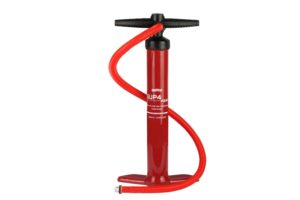 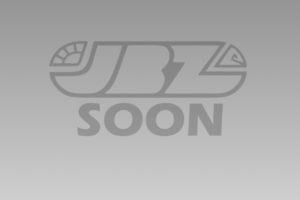 New Transport Bag JBAY.ZONE specific for the transport of Kayak 425 and its accessories. 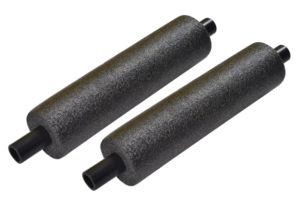 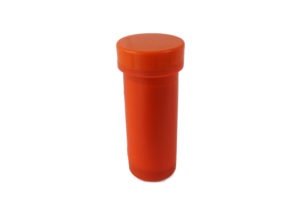 Thanks to the construction of PVC Laminate with Drop-Stitch UAL Technology the Kayak 425 JBAY.ZONE is inflatable up to the ideal recommended pressure of 13Psi, and when reached proves to be rigid and with an excellent weight support.

JBAY.ZONE has managed to contain and keep the weight of the new Kayak 425 under 20kg, achieving a total weight of only 16,2kg.

The three air chambers, one for the dunnage and two for the tubulars, that the Kayak 425 has, allow the inflation of each of them at a pressure of 13psi corresponding to 0,9bar. The high pressure allows to obtain a decided increase of the performances, making moreover the Kayak 425 similar, to the touch and to the sight, to a rigid canoe.

The Laminated PVC used to assemble the Kayak 425 is composed of two layers of High Resistance PVC interspersed with a layer of Polyester to further reinforce the structure of the product.

The 425 JBAY.ZONE Kayak comfortably accommodates two canoeists at once thanks to the hull length of over four meters. In addition to the two semi-rigid seats that can be attached with the appropriate straps, the 425 kayak also has a pair of footrests to increase the stability of the user while paddling.

The hull of the Kayak 425 is wide enough not to limit in a too invasive way the movements of the canoeists without being too wide with the risk of slowing down or invalidating the turn and worsening in general the agility of movement in the water.

The height of the tubulars is perfectly dimensioned with respect to the paddling position inside the kayak. Movements are smooth and without hindrance.

In the 425 kayak JBAY.ZONE has included a pair of semi-rigid seats, much more comfortable and high performance than the inflatable seats included in most kayaks of this type, a pair of double paddles with removable aluminum handle 230cm, a pair of footrests, the pump for inflation, the repair kit and the practical bag for transporting the canoe.

The 425 JBAY.ZONE Kayak is a hydrodynamic, mixed hull that features a V-shaped rigid plastic keel at the bow with a flat bottom center. This manages to ensure a decent speed without making the kayak too heavy during the turn, keeping it very manageable and agile. The high-strength laminated PVC with which the Kayak 425 is constructed is supported, for both the tubular and the dunnage, by Drop-Stitch technology. The internal structure is composed of thousands of strands of fabric welded to laminated PVC that allow the Kayak 425, once inflated to the JBAY.ZONE recommended pressure of 13Psi, to prove extremely rigid and resistant, similar to a wooden or fiberglass canoe.

The valves, for each of the three air chambers installed on the Kayak 425, are high-pressure, bayonet-mounted type with a central safety pin. The two included seats are semi-rigid of high quality, more comfortable and resistant than the classic inflatable seats and they are fixed to the Kayak 425 tubular by means of special adjustable straps. The two footrests provided also provide a firm foothold and excellent stability when paddling, allowing you to give more force to the movements of the paddle. At the bow and stern of the Kayak 425 JBAY.ZONE you will find space for the practical carrying handles and elastic laces to store your equipment safely during the excursion.